Contribution to help the victims of Typhoon Haiyan

In pursuant to the Typhoon Haiyan Disaster, AA Foundation has organized a collection of funds in November 2013 to respond to the disaster that hit Philippines. The foundation encouraged our AA staff to contribute financially to help the victims, through the collection we managed to raise RM11,256.00 to help with the relief work.

With the help of Assist & Assistance Concept (our Manila office), the money was used to buy medical supplies. As the donation amount was significant, it took the team two days to get all the medicine, food and non-food items organized and delivered to Philippine Red Cross office. The team was welcomed by the Philippine Red Cross Secretary General Ms. Gwendolyn Pang and she expressed her appreciation for the help that was given. 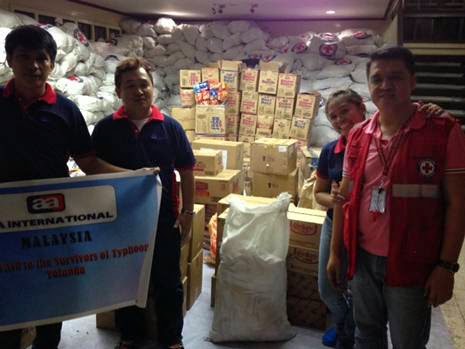 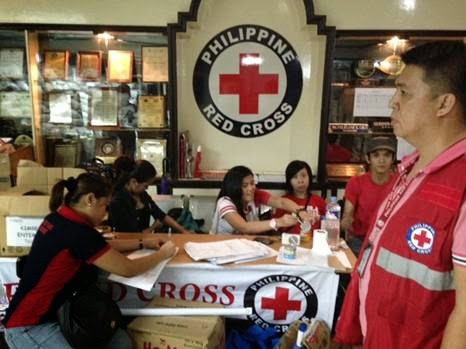 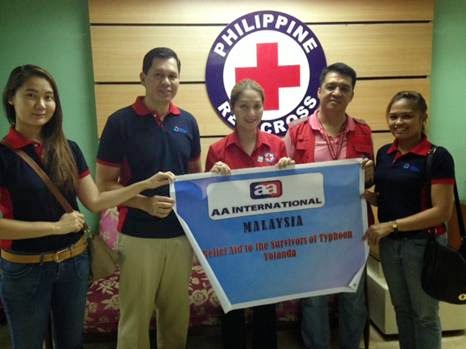 (Group photo of the team with Ms. Gwendolyn Pang)

We thank you for all your contributions, let's continue to see a need and meet the need!
Posted by celina at 4:41 PM No comments:

Hello!!
Passionately You campaign 2011 is coming to a close on 22 October 2011, so do come by JayaOne from 12pm to 10pm this Saturday with your family and friends to enjoy fun filled activities and performances.
Here's the Don't Duck It Party agenda, you may find out more at www.dontduckit.com

The activities for the day are FREE breast examination & on-site vaccination, Acoustic Performance by Tony Lee, Go Kart Mania, Cheerleading Performance by CHARM, Quacky Kart Race, Zilwin Magic (Mentalism Show), Don't Duck It Just Walk It, and the main highlight (Raffles Draw & Prize presentation), band performances by GARASU & K-Town Clan.
There'e even a Move It Like Jagger flash mob, please do check out this video http://www.youtube.com/watch?v=jbNmTjtswuk if you're a dancer or someone who loves dancing, learn the moves and join in the fun :D
The main highlight for the night would definitely be the Raffle Draw, there are many exciting prizes up for grabs like a 42" LED TV, Apple Macbook Air, Holiday/ Travel voucher, iPad 2, SONY PlayStation3 and cash vouchers.
We are really excited for the finale and we hope to see you this weekend!!!
Posted by celina at 7:11 AM No comments:

Passionately You 2011 is back in action!

This year we are proud to announce that Passionately You 2011 is back with a new logo.

Passionately You is a joint community effort by Assunta Hospital, Asia Assistance, Jaya One and PJ Live Arts.

The objective of this campaign is to create awareness on early detection and prevention of Breast & Cervical cancer. The other objective is to raise RM100,000 for Assunta Foundation to help the underprivileged patients seek proper treatment.
This year, there is also a website called http://www.dontduckit.com/ which aims to reach out to the younger generation and to encourage Malaysiansto pledge to support this cause. 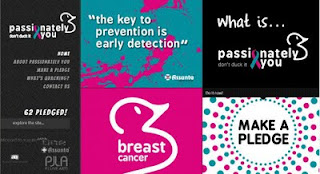 The upcoming event for Passionately You is the Buy4Love Jumble sale which is happening on 20 August 2011 from 10am till 6pm.

The Jumble Sale donation drive is going on from 1st July till 31 July 2011 at JayaOne (information counter outside Cold Storage). So if you have used items which are still in good condition, you may donate them there. 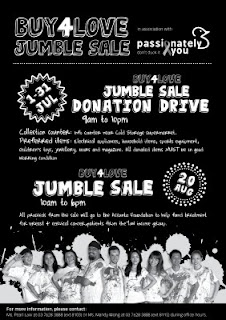 We shall be updating more information as the time comes! So stay tuned.
Posted by celina at 12:24 PM No comments:

To our members/ readers/ followers/ visitors and to everyone, AA Foundation would like to wish you a..... 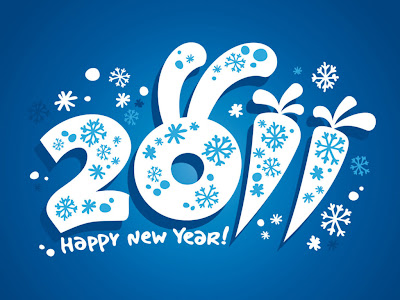 How was your 2010 like? Although we may not know how the year had ended for you, but we sincerely wish that 2011 would be a year of success, hope and opportunities for everyone. If you have not thought of your new year resolutions, it should be a good time for you to think about it and pen it down right now.

In this 2011, AA Foundation's priority goal is to continue helping and reduce the sufferings of the poor and vulnerable at this difficult time. And of course, do look out for our updates and news on this year's PASSIONATELY.YOU 2011, returning and lined up with plenty of exciting events which you would never want to miss.

The last project of AA Foundation in 2010 was to help raise money to support 4 children with various heart defects. Many of us may not realise that the number of heart defect cases that occur in children are elevating far more than expected, exceeding the number of cases of children diagnosed with Down Syndrome. According to a recent research, there are more than 35,000 cases reported in a year on children who suffer from such heart defects, and not many of them have been able to survive the battle or given the opportunity to undergo immediate and early surgeries.
We came across the news of four families appealing for donations from the public to enable their children to undergo surgeries to correct their heart defects, ranging from as young as a 5-month-old baby (suffering from serious congenital heart disease) to a 14-year-old boy (suffering from pulmonary artesia and ventricular spetal heart defects). Thanks to the advanced medical examination and treatment that is available in our society today, we are able to support these young children and families, providing them with care, love and hope. 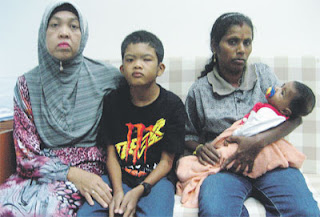 For those who have contributed to this good cause with us, thank you for your support. Let us all pray for the successful recovery of these children and continue to send good wishes to each of them.
Posted by Pearl at 2:29 PM No comments:

Bald is the New Beautiful

If you think you look horribly ugly and unattractive if you're bald, you might be wrong! No... No..., we're not talking about Rihanna or Britney Spears or J Lo here. But we want to show you that BALD can be both sexy and beautiful at the same time. Your next question would be - How on earth is this possible???
Previously, we shared with you an article on how several blilionnaires have pledged their wealth to the society in the US. I came across this article yesterday and found this story aspiring. I honestly admit that I am not as brave as what these people have been doing out there, but I have to salute them for their courage and love for the society. BRAVO!
Fundraising efforts, uh huh... we've heard of food fairs, marathons, roadshows, charity performances, concerts, garage sales, free car wash, etc.... but how about Head Shaving?? This may sound new to some of you who have not been aware of such move. It is definitely not something new but is indeed innovative and a supportive way of raising fund and is used by many fundraisers these days. Its concept is simple, an individual pledges to raise certain amount of money and in turn agrees to shave when someone donates to the cause.
One example is from this pair of mother and daughter who both decided to forego their precious hair for charity's sake. Further coverage on this story can be found at http://thestar.com.my/news/story.asp?file=/2010/9/12/nation/7022612&sec=nation
In fact, what Anne-Marie and her mum did was not the very first to happen in Malaysia. Lets take a glimpse at our heroes & heroines whom had done us proud. We should all applaud these wonderful volunteers. Earlier this year in April 2010, World Vision Malaysia organised a charity event at The Curve, Mutiara Damansara which was named as "Operation Botak" ('Botak' is a malay term commonly used locally which means bald).

This is not the end. Our famous blogger Mr. Kenny Sia had also done his part for the Sarawak Children's Cancer Society when he honoured his promise that if the funds raised reached RM50,000 and above, he shall SHAVE. And so did he...


We also have some other interesting websites for your reading pleasure:-

1. Worlds Greatest Shave [http://www.worldsgreatestshave.com/index.php]
This is a foundation set up for leukemia patients in Australia and once held the Guinness World Record
in 1999 for achieving the most number of heads shaved within a 24-hour period.


A point to note:

And this is extremely important! If anyone of you ever decides to shave your head, do check through the company's policies or dress codes allowed in school/ college to ensure you do not breach any of the rules & regulations imposed by your employers or schools/ colleges. Believe it or not, there have been cases where students are suspended from school and staffs fired from work - although it may be for a good cause, it might cause you double trouble. Good luck ~ ~ 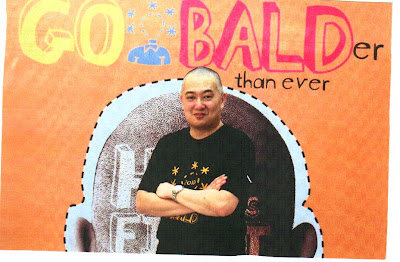 Ahn Nyong Ha Sae Yo! The Passionately.You team is in this time. The reason why we’re all gathered in the world’s second largest metropolitan area is because of the Asian Hospital Management Award 2010 and for one purpose.... our Passionately.Pink campaign, jointly organised in collaboration with Assunta Hospital has been nominated for one of the categories, hooray... yippie ~ ~ ~ 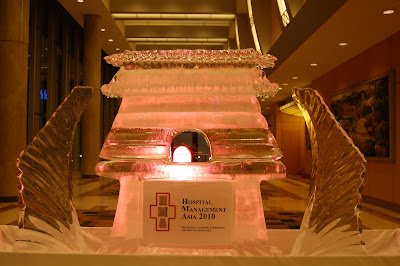 The mission of AHMA is to recognise and promote the best practices in the industry of hospital management within the region. Awards are given annually for all outstanding projects for the past year. Specifically, this award is given in cooperation with the Joint Commission International, Korean Hospital Association and Asian Hospital Federation to recognise a hospital's outstanding achievements and professional accomplishments that has made an impact on its clients and the public, therefore resulting in the hospital gaining recognition as an innovator or leader in the field. The emphasis was given on businesses that can be more or less attributable to the project and what this is as a percentage of the hospital's revenue. In this sense, a hospital that launched a successful campaign with effective methods/ marketing tools and is able to show significant results will be eligible as the winner.
AND THE WINNER IS................
YES! We did it! A  was announced as the recipient of the Asian Hospital Management Award 2010, in the category of Marketing, PR or Promotional Project for the Passionately.You Cervical & Breast Cancer Awareness Campaign 2009.

We felt privileged to be in the competition with four other top and reputable hospitals in the South East Asian region. We have been recognised for our efforts which would not have been possible without the support of our volunteers. This recognition is an endorsement for the work we've been doing and it lends further support and motivation to our continued efforts to make Passionately.You a campaign that everyone is proud of. At the same time, we would like to thank all our volunteers who have been involved in the various events held for this campaign for your efforts in carrying out the activities, making this a great success for everyone.
Posted by Pearl at 12:48 PM No comments:

You are Visitor No: